Nazastarool is an undead encountered during Shilo Village quest. He has three forms; the first being a level 91 Zombie, second a 68 Skeleton and finally a 93 Ghost. All three forms have to be fought during the quest. A very easy way to kill him is to either range or use magic on him, as he can get stuck behind obstacles. All three forms may also be safespotted with a Halberd. He is found in Rashiliyia's Tomb. 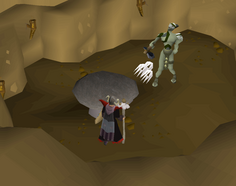 Lure Nazastarool to the northern part of the dolmen to safespot him.

When defeated, he curses the player and disappears.

He can be fought in the Nightmare Zone after the quest is complete, but it will not count towards a zombie, skeleton, or ghost Slayer assignment.