Hey, appreciate the contributions you've made recently. If you have a Discord account, it would be helpful on occasion if you could join our server for discussion (for example I was gonna mass revert the bot edits removing <nowiki/> tags as they're at least most of the time used on purpose, and it would be quicker to communicate there to inform you). --laagone talk 22:50, 7 July 2020 (UTC)

Hi. Well, I noticed that I was a little too fast with some of the nowiki edits esp. places that combined something italics with an apostrophe and similar cases (wish I knew of an alternative to nowiki tags in that case), so I went back over each one and undid those that were bad. Those I left should have been fine I think. Sorry if it caused any problems, I'll be much more careful from now on. --The scribe

No worries; for reference, the ones I just finished reverting were breaking bulleted lists in a template parameter (as in here) where the tag is used as a workaround to get around problems with formatting. --laagone talk 23:21, 7 July 2020 (UTC)

I see. I just tested the emergency break. It doesn't seem to stop edits done using JWB. :( --The scribe

When you say multiple values, do you mean in the cases where there are multiple versions in the infobox? The way this is supposed to work is that the stats for each version get saved into a separate SMW subobject (see docs). For example, Guthan's warspear has properties set at different subobjects for the undamaged and damaged versions. This way dynamic tables like Two-handed slot table can list each subobject as a separate item.

Sorry for the delay, if you join our discord server there's a channel #wiki-tech where more people can see questions and answer much faster. Riblet15 (talk) 03:00, 19 July 2020 (UTC)

Yes, I'm talking about items that have multiple versions in the infobox. Thanks for the explanation of how the data is organized, it does clear things up for me.

Unrelated to this I now also understand why the SMW query at the Staves page failed. Not because it was too large (since the 'Slottable' module submits a much larger query), but rather because I submitted a query with too many pages in the page selection part of the query.

But back to the matter at hand. Looking at the main property page for Guthan's warspear, you see the cummulative attribute sets such as 'All Slash attack bonus' lists two values. This means that SMW basically can not reliably use this column for sorting. And pre-sorting is kind of important since the order in which modules gets their parameters is random, and only sorting by name is not desireable in many cases (see the Scimitar page for example, which is sorted by Strength). And the main item pages is how I go about selecting items to list. If I start listing all the sub-variants of items instead, I'm afraid that the page selection part of some queries might grow so large that I end up with the problem that SMW starts rejecting them. Besides for 'Infotable Bonuses' we're really only interested in the principal variant of an item and can ignore all the others. --The scribe

I'm not sure the best way to figure this out from lua, but the "principal variant" will always be one of the subobjects defined on the page. By default, it will be version1, but this can be changed using the defver param in the infobox. The subobject name will be ArticleName#VersionName, but this can also be changed using the smwname parameter. Attack potion is a complicated example, where the defver is set to 4 (version name = 4 dose), then the smwname4 is set to (4). So in this case the principal subobject would be Attack potion#(4).
In many cases, it should be possible to query for items instead of listing them all explicitly. For example on the spears table you could find all subobjects with Combat style set to "spear" (example). I think this would at least avoid the restriction you're running into about the query having too many items in it. I would probably recommend having all subobjects in the output, unless it ends up looking really bad.
I haven't tried this, but it's possible you could also get around the restriction by keeping each line of the infotable as a separate template. Instead of 1 query with N arguments you would have N queries, which may or may not bypass the SMW limits (I'm not sure if the limit is applied for a single query or for a single page render).
I really do recommend asking some questions in Discord, there are at least 5 people who have much more SMW experience than me and might have better suggestions. Riblet15 (talk) 18:14, 20 July 2020 (UTC)

Hey! I know you've been working on the Infobox Bonuses stuff as of late. I noticed on the Halberd page that there's now an error: Lua error in Module:Infotable_Bonuses at line 92: the number of sort orders must match the number of sort keys. When you have a moment can you investigate and remedy? Thanks! -Legaia2Pla ᴛ · ʟ · ᴄ 22:06, 21 July 2020 (UTC)

Whoops. I'll fix it immediately. Thanks for letting me know. --The scribe

Hi, I hope things are going well! I have a few questions about the use of LaTeX on the wiki with a particular focus on the Energy page. (1) Why did you insert an align environment? This environment can be useful when there's more than one line of equations but isn't useful when there's only one equation. (2) Why did you restrict the domain of the function L to [0,64]? That mapping is correct with the domain you edited in, but players would want to know the mapping for any nonnegative weight. (3) Why did you remove the comma from the end of the mathematical expression and insert a colon at the end of the preceding english sentence? Math can be placed into sentences, and now the sentence doesn't make grammatical sense to me with the "where w is weight..." at the end. (4) Why did you replace \left\lfloor with \lfoor (and same with \right\rfloor to \rfloor)? The \left and \right delimiter counterparts are used to scale the the delimiter to the correct size. Heritability (talk) 19:05, 2 August 2020 (UTC)

The rollback on that page was accidental and I apologize for that. I have no reason in particular for my last edit other than aesthetics which isn't a good reason, so I'll make it simple and undo it. Hope that's satisfactory. --The scribe

Okay, thanks! Perhaps we could reach out to the broader wiki community to see the formatting for math that is generally preferred? Also, what was the test that you did that lead you to conclude that the energy formula is "close enough" to correct? From my tests, it seems to be exactly correct. Heritability (talk) 22:04, 2 August 2020 (UTC)

I don't think there is a style guide at the moment, so it's mostly up to whoever is writing it. It should be possible to suggest a style guide on the Runescape:Active discussions page if you want to. What I've been doing lately is pulling out big formulas where it would disrupt the flow of text. Examples: Larran's key and Brimstone key. Latex support in Mediawiki is lacking a lot of features, but I've found that align gives a lot of flexibility with formatting, so I started using it a lot, even in places where I only needed some horisontal spacing. The test I did wasn't particularly accurate, hence the phrasing. --The scribe

Those are interesting examples; thanks for sharing them! I think this could be a place where our preferences disagree. To me, the page shown here 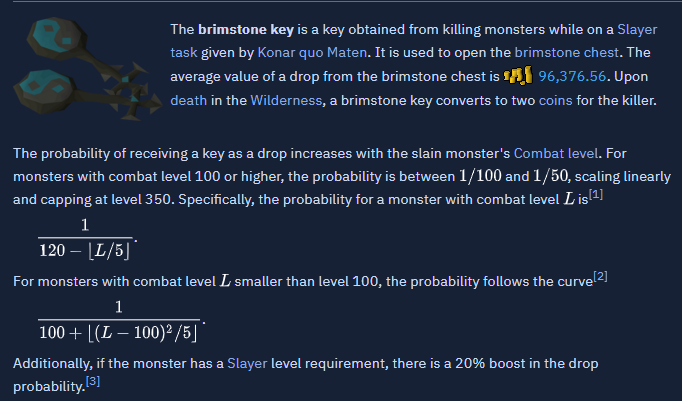 looks better, since the reader doesn't have to read around a block of formulas in the middle of the page and keep up with which number references which formula. Do you prefer the page as it is currently formatted? (I'll keep these examples in mind when making a discussion for a style guide.) By the way, could you respond with whether you're on Discord? It would be more convenient I think to have some quick discussion there. Heritability (talk) 00:53, 3 August 2020 (UTC)

True, your example is more readable, like you said. What I was ultimately trying to avoid there is the look of the Brimstone key page as it was 25 June, with two big math blobs right in the middle of the sentences. But some pages looks nice even with inline math, such as Chaos Temple (hut), so it's a bit subjective... Another thing I believe is not good style can be found on the Combat level page - variables that are either words or multiple words. Using single letter variables like

for instance, would make the formulas less cluttered, but then one has to describe what each variable is elsewhere. I guess that about covers what I think about style. If you want to, you can just change the style of those pages (as encouraged by RS:BB), I doubt anyone would mind, and it beats waiting while a style guide is submitted for approval. I'm not on Discord btw. --The scribe

Okay, thanks for sharing those! Yeah, I agree with your sentiment about using single letter variables, I'm not sure what's best there. (One thing I don't at all like now is how so many equations are just having expressions like "

", which is an inappropriate use of LaTeX since each character is treated as multiplying the others, rather than being treated as a word.) I'll make a post in the next few days seeking consensus about style for mathematical expressions. Tbh, I wasn't a big fan of the math on the Chaos Temple page, but I just edited it to include inline math mode, which imo makes the page much cleaner. Thanks for the update on Discord! Heritability (talk) 18:25, 3 August 2020 (UTC)

Heya, was wondering about the templates such as {{Crop}} where you had added the bit {{#if:{{{nocat|}}} to them. What does this do instead of leaving them as mainonly because now they're causing other pages to show up in maintenance categories. The main offender is RuneScape:Images and media policy. If you could explain the changes and why they're necessary that'd be great, and further, if the chance is necessary, could we do something to prevent RS:Images and media policy from being categorised. Thanks! Legaia2Pla ᴛ · ʟ · ᴄ 00:41, 9 August 2020 (UTC)

Hi. Adding that parameter was a habit I developed after observing that some templates would fail to add a maintenance category outside of the main namespace. I forgot the specific template, but I remember adding a maintenance template to an article in the project namespace (Runescape) and not having it added to the maintenance category. Example uses of the templates (such as those on RS:Templates or template documentation pages) were supposed to set the parameter to true, I guess I overlooked a page, which is sloppy work on my part.

I guess some templates that won't ever be used for examples, or templates that is guaranteed not to have a use outside of their intended namespace(s) do not need such a parameter and would be better served by instead white/black-list certain namespaces. I don't mind doing the manual labour of adding that parameter to all the places where templates are being used as an example. But if there is a chance this could become a maintenance hassle going forward, perhaps the better option is to drop the parameter where it is appropriate. I guess for the Crop template and similar templates this is would be the best option.

I'll start by having a look at that page and either add the parameter or try to identify templates that might be better served by having the parameter removed. If you spot any templates other than the fileonly ones that probably don't need this parameter please give me a hint, so I can fix it up. --The scribe