To wield the imbued crystal shield, a player required 70 Defence and 50 Agility, as well as completion of the Roving Elves quest. The need for imbuing the shield was later removed, and the effect is always in-effect. 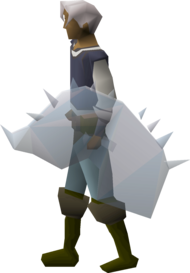 The crystal shield degraded over time. After 250 hits taken, it degraded into a "Crystal shield 9/10 (i)", and thereafter for every 250 hits taken, it will degrade another 1/10th, until it reverted back into a crystal seed after a total of 2,500 hits, and required recharging before it could be used again. Due to being imbued, the stats of the imbued crystal shield did not deteriorate like its unimbued version. Once it reverted to a crystal seed, the imbued status of the shield was lost, and it had to be imbued again once it has was recharged.

Ilfeen will recharge crystal seeds into crystal bows or crystal shields. She can be found teleporting back and forth between two clearings in Isafdar.

Initially, Ilfeen charges 750,000 coins to re-enchant a crystal seed into a crystal shield. However, the price is decreased by 150,000 coins each time Ilfeen re-enchants a seed for a player, in the following manner, until reaching the minimum recharge cost of 150,000 coins: