Slash Bash is an undead ourg encountered during the Zogre Flesh Eaters quest. He uses both melee and ranged attacks. It is vital to have Relicym's balm or Sanfew serum, and at least swordfish or better when fighting him, as the disease can drain stats by up to 15. He is very difficult as he can drain your prayer and switch between devastating range and powerful melee. However, it is possible to use magic or ranged from behind the stand or a stack of bones, and then he can only damage the player using range.

Brutal arrows and the Crumble Undead spell are his weakness. Other attacks, such as melee, will be futile, as they can only hit up to 25% of the normal max hit (for example, up to 5 if a player normally hits up to 20) on Slash Bash. Taking too long to kill Slash Bash will cause him to disappear, forcing a player to fight him again.

It is possible to safespot him using brutal arrows or the Crumble Undead spell. Using Protect from Missiles with this method will reduce the damage taken to 0. 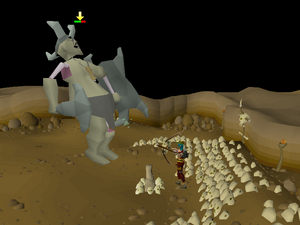 Slash Bash was an ourg warrior in the service of Bandos during the God Wars. Very little is known about his life, but according to General Graardor he took part in a mission to corner Zamorak, the mission failed and Slash Bash was killed and later buried in the ancient burial ground of Jiggig.[1] His corpse would remain there for millennia until Sithik Ints had Brentle Vahn assist him in cursing Jiggig causing Slash Bash and hundreds of skogres and zogres to be reanimated.

Following the curse, the ogre shaman Grish asked an adventurer to help them create a new sacred burial ground requiring an ancient ogre artefact, which now was in the possession of the undead Slash Bash. This led to the adventurer fighting against the undead ourg using techniques, they had learned to fend off undead ogres and keeping their disease at bay. Successfully slaying Slash Bash, the adventurer returned the artefact to the ogres.