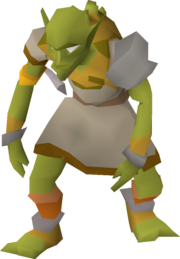 Wormbrain is a goblin in the Port Sarim Jail that players must barter with in order to get the third piece of the map in the Dragon Slayer quest. One can offer him 10,000 coins for his map piece, or fight him. When the player reduces him to 0 hitpoints, he simply drops his part of the map and says, "Ow!". Players must then use Telekinetic Grab to get the third of the map parts.

Wormbrain, along with a small band of goblins, decided to ransack Lumbridge. While doing so, they killed Lozar, an elderly mage and the second last surviving Crandorian. In the rubble, Wormbrain found a box which he tried to open, while the others left Wormbrain to the guards and fled.