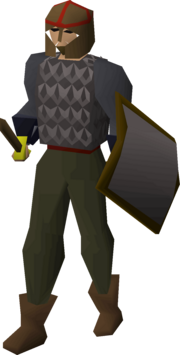 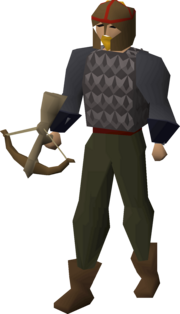 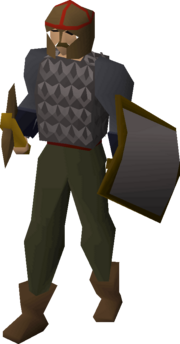 There are many guards in Gielinor, usually in populated, major cities, such as Falador, Varrock, Ardougne, and others. Guards also patrol the area just south of the wilderness ditch at Edgeville.

Their level ranges from 19-22, and they are quite weak. All guards are not aggressive unless they are attacked first. In Deadman mode, there are unique level 1337 guards who are able to hit up to 30 with a very high accuracy (melee and Ice Barrage). They are capable of Tele Blocking and negating Prayer completely. These guards will kill anyone who enters a safe zone with a PK skull instantly. The combat level is a reference to leetspeak.

Guards can be pickpocketed at level 40 Thieving, giving 46.5 experience.

Guards are also a popular clue scroll drop monster due to their low level and ability to drop medium clue scrolls. Completion of the medium Falador Diary allows the player to have a 10% increased chance of receiving a clue scroll drop from guards in Falador.

The guards in Falador and Edgeville wear an iron chainbody and a bronze med helm as armour. Their melee weaponry consists mostly of bronze swords and bronze battleaxes. Some guards wield bows and wear hardleather bodies.

The guards of Ardougne wield a steel mace, steel chainbody, and a helmet that looks like a spiny helmet without spikes. They also wear red trousers and blue shirts under their chainmail.

Guards in Varrock wear unique armour and weapons that resemble that of a Renegade knight.

Guards should not be confused with Al-Kharid warriors in the Emir's Palace, Soldiers and Watchmen in Yanille, Kourend guards in Great Kourend, guards found at the entrance of the Burthorpe Castle, or the aggressive jail guards found in Draynor Village.

Guards are a decent alternative to Master Farmers, as they give 30 coins (rather than seeds), and slightly more experience.

A recommended way to efficiently thieve from Guards is to complete the Recruitment Drive quest, setting your spawn to Falador, and pickpocket Falador guards until you die. Once you die, run straight up and pick up any coins that you died with.

A successful pickpocket attempt will gain the following loot: