Trading is the exchange of gold and items between players. Trading is one of RuneScape's oldest features and while not essential to game play, it plays a large part in the community and is utilised by nearly every player except for Ironmen who cannot trade with other players.

The most common form of trading in Old School RuneScape is via the Grand Exchange. This system - headquartered in north-west Varrock - automates the process of exchanging items for coins by letting players set up to eight buy or sell offers for a desired price.

Compared to other methods, trading via the Grand Exchange removes the need for direct player-to-player interaction, the need to be logged in at the same time as the other party and greatly reduces the exposure to various scams. These advantages come in exchange for a 1% convenience fee and limitations on quantity.

Traditional trading via the right-click trade option has many use cases, among which:

The official trading worlds are World 301 (for free players) and World 302 (for members). Those looking to trade directly with other players should be wary of a great number of scams that involve player-to-player trading.

For a few months prior to the release of the Grand Exchange, players could use the Trading Post to the find trading partners. The RuneScape Forums and third-party websites were also commonly used for this purpose.

How to trade[edit | edit source]

The trading process is relatively simple and divided into three steps:

Players must be wary, as there is no way to undo a trade; any transaction is final.

To trade with someone, a player must right-click the person and select the "Trade with" option. The message "Sending trade offer..." will appear in the chat box, and "[player name] wishes to trade with you." will appear in the other player's chat box. That person must then accept the invitation by clicking on that message. If the offer is accepted, a trade window will open for each player.

However, if one of the traders has a certain interface up, such as bank, Equipment Stats, or trading interface with another player, "Other player is busy at the moment." will show up in the chatbox. If either player is an ironman, a message states that they "stand alone", preventing trading.

Players in a busy world who wish to see their trading partner's text may click on their "trade" tab at the bottom of the screen. This allows the player to see only their partner's chat and their own. 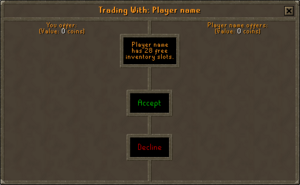 Trading with another player.

If an item is removed from an offer, a big red flashing exclamation point will appear where the item used to be with a message noting to check the offer. If the player attempts to accept the offer, they will be given a warning to double check the offer.

There is also an indicator showing slots left, accept and decline button. Once either player is satisfied with the trade, "Accept" must be clicked to proceed. When both players have done so, the second trade window appears. If a player does not wish to trade with the other anymore, "Decline" may be clicked to close the trade window.

The second window is a final confirmation of the transaction; no actual offering of items will take place in this window. Here, players are able to review which items have been offered by each party to confirm they are trading what they intended to. Numbers are more specific in these trade window; for example, if a player offers 10,435,672 coins in the first window, it will only display as a green 10M. In the second window however, the full value is shown and the player will see that 10,435,672 coins are being offered.

Any items modified from the first window will still be marked in red, this time with a bar that spans the length of the entire half of the other player's window.

When the player's trading partner declines the trade or performs some other action that has them exit the trading screen, the player will be notified with the "Other player declined trade." message. This change was made in response to ongoing scams.

A risky form of trading involves dropping items for another player to pick up. In order to avoid third parties from unexpectedly picking up the item, this is typically done in rarely visited locations, or in the Wilderness, where items appear to other players immediately.

Circumstances in which drop trading has traditionally been used include:

As above, players should be wary of scams that involve drop trading.

Other forms of exchanging items between players include: