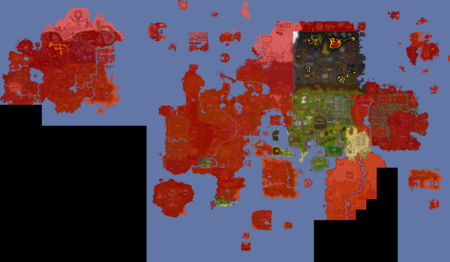 Free-to-play, also known as F2P, is the free version of Old School RuneScape where no payment to Jagex is required to play. Players who play the free version of RuneScape are known as "Free players", "F2Pers", or "Non-members". This is in contrast to members, who pay a fee for access to a much larger map and a multitude of skills, items, quests, and activities that are unavailable to free-to-play users.

Free-to-play users can gain access to membership for free through their in-game activities by purchasing membership bonds for coins on the Grand Exchange.

Free-to-play accounts have access to 15 skills, with a maximum total level of 1493[1]. Levels in members-only skills do not count towards entry into 500 Total Level and 750 Total Level free-to-play worlds, making the true requirements 508 and 758, respectively.

Running as a form of transportation depletes run energy quickly due to the inability to train Agility. Free-to-play transportation done in an efficient manner is limited to teleportation, Grouping teleports, canoes, items like the chronicle, and some NPCs. When running, lower weight will slow the speed that run energy depletes. The chronicle is a useful early game item for fast access to the Champions' Guild, just south of Varrock, and also close to a canoe station. An axe and 12 Woodcutting are required for creating the first tier of canoe. To go to the Ferox Enclave in the Wilderness, 57 Woodcutting and an axe are required, leaving the Ferox Enclave only requires 12 Woodcutting and an axe. Alternatively, players can use the minigame teleport to Clan Wars, which has a 20 minute cooldown. The Ferox Enclave has a bank, Pool of Refreshment to restore Prayer points, Hitpoints, run energy, and all other skill levels. Home Teleport can be used once every 30 minutes, and does not share a cooldown timer with the minigames teleport. At 37 Magic, players will unlock the Falador Teleport, the last free-to-play teleport available.

There are 22 free-to-play quests with a total of 44 available quest points. With 32 quest points, the Champions' Guild becomes available, along with the ability to start the Dragon Slayer I quest.

The current F2P accessible areas on the surface of OSRS currently closely resemble that of the early to mid era of Runescape HD, with some added content that never existed in the original RuneScape game.

Since its inception, areas such as the Corsair Cove or Ruins of Camdozaal have been added. The Edgeville smelting furnace and Castle Wars have also been made F2P.

Treasure Trail rewards available for F2P players to buy through trading or the Grand Exchange (but can only be obtained through Treasure Trails in P2P):