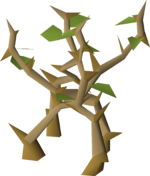 Light jungle is one of the three types of jungle found in Tai Bwo Wannai, along with Medium and Dense Jungles.

It can be cut with a machete at level 10 Woodcutting, giving 32 experience, and yields thatch spar light, which can be used to make skewer sticks or used in the Tai Bwo Wannai Cleanup minigame to reinforce the village fences. The jungle is cut in 4 sections, once all 4 sections are cut the jungle is depleted. The jungle can regrow to its fully grown state even if it is not fully depleted. Each cut section provides thatch spar light.

All types of jungle do not provide a chance at receiving a bird's nest, clue nest, or the beaver pet.

When cutting these many dangerous things may pop out, such as broodoo victims, mosquito swarms, tribesmen, bush snakes and jungle spiders. Be sure to bring antipoison as they may poison players. If players are a low level or a pure it is suggested to bring a small amount of food, restore potions and some decent armour. These attacks occur quite often. The player may also reveal gout tubers or gem rocks while cutting these, at a rate of 1/100 for gout tubers[1] and 1/20 for gem rocks.[2]

These are the most common jungles cut of the three because of how easy it is to cut, making it faster to get gout tubers.

While clearing away the jungle, your character will occasionally make a brief pause as if "taking a breather," indicating that the player has failed to cut the jungle.