From Old School RuneScape Wiki
Jump to navigation Jump to search
This article is about trees found in the Chambers of Xeric. For the farming item, see sapling.
SaplingStump? (edit) 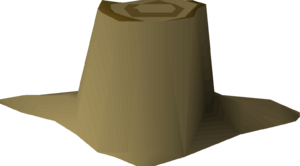 Saplings are trees found in the Chambers of Xeric. They yield kindling when cut, which is used to start fires and fuelling the braziers in the ice demon's lair.

The yield per successful chop is scaled to the player's Woodcutting level, up to a maximum of eight. The experience gained also varies, scaling based on the amount of kindling received. The sapling becomes a stump when it is cut down, which will respawn after a few seconds.