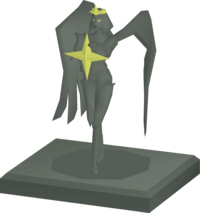 The statue of Efaritay Hallow above the large mausoleum in the Icyene Graveyard.

Queen Efaritay Hallow was the legendary Icyene queen who ruled the kingdom of Hallowvale with her human husband Ascertes from their palace Ver Sinhaza during the Third Age. A Zamorakian army led by the vampyre Lord Drakan invaded Hallowland, Lord Drakan's forces managed to capture Ascertes, which forced Queen Efaritay to surrender. It is unknown what happened to Queen Efaritay, but it's presumed she was captured by Lord Drakan.

In Sins of the Father, the icyenic Graveyard located south-east of Efaritay's former palace, now known as Ver sinhaza, is visited. There, it is revealed that she is not buried in her family's tomb, suggesting that she could still be alive to this day. It is also revealed that Safalaan Hallow is her son.

The only remaining memories of the once glamourous and revered Queen Efaritay are mentioned in letters and documents found in the once abandoned, now inhabitated city of Burgh de Rott and in The sleeping sevens in forgotten libraries.

On the basement wall of the run-down inn in Burgh de Rott there still hangs a plaque which reads: "Blessings on Efaritay, our Icyene Queen from far off lands and her loving children of Hallowed name."

Two The sleeping sevens of the secret library of the Temple of Paterdomus mention of the Queen's prestige.