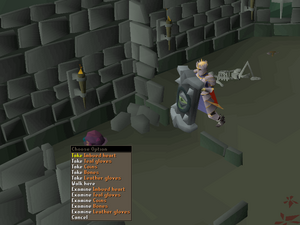 A player receives loot from a monster's drop table.

A drop table represents a list of drops that a monster is able to drop. Most monsters have their own drop table that is largely determined by the requirements to reach them, their difficulty to kill and how often they can be killed; for example, most slayer bosses have a fairly generous drop table as they can only be killed while on the appropriate slayer task.

While most monsters in Old School RuneScape have their own drop table, a large majority have several universal sub-tables that are called upon within their main drop table, such as the herb and rare drop table. However, there are many other drop tables that are shared between various monsters.

A pre-roll is a drop table which is rolled before rolling the main drop table. Typically, pre-rolls will go down a list of items in a predetermined order and if no pre-rolled items are hit, the main table is then rolled.

An example of a pre-roll would be loot from a supply crate, in which the player first rolls for a dragon axe. If that roll fails, then the player will roll for a Phoenix, then a tome of fire, warm gloves, bruma torch and lastly a piece of the pyromancer outfit in which the player has the least of (though players will receive the garb, hood, robe and boots in that order if they do not have any pieces of the outfit). Only when the player fails all six rolls will they roll the main supply crate drop table.

Tertiary drops are drops that are rolled independently of the main drop table; examples include pets, clue scrolls and looting bags. Unlike the main drop, multiple tertiary drops can be obtained in a single kill; however, similarly classed items cannot be obtained at the same time: for example, if a curved bone is obtained as a tertiary drop, it is impossible to also obtain a long bone, but this roll will have no effect on obtaining a clue scroll.

Some monsters also access a set of tertiary drops, such as superior slayer monsters, who roll a tertiary drop table alongside three rolls on their standard counterpart's drop table.

If the monster can be found in free-to-play, the roll on the general seed drop table is replaced by 5 coins when killed on free-to-play worlds.

The general seed drop table is unique because the seeds that are available are dependent on the combat level of monster that has access to this table. The formula to calculate which subtables the player will have access to when rolled for is as follows:

. A random number between 0 and

is rolled in order to determine which of the sub-tables is accessed.

is less than 485, the player will roll this subtable.

is 995 or greater, the player will roll this subtable.

If the monster can be found in free-to-play, the roll on the uncommon seed drop table is replaced by 5 coins when killed on free-to-play worlds.

This standardized list of herb drops is shared by many monsters across Gielinor. If the monster is killed on a free-to-play world, the roll on the herb drop table is replaced by 10 coins instead.

This table is accessed by superior slayer monsters. The chance of landing the Superior drop table is