Earth warriors are a type of humanoid earth elemental found in a dirt-lined chamber in the Edgeville Dungeon. This area is in the Wilderness so it is advised to come prepared for player killers. Earth warriors can be safe-spotted in the bottom right corner or top of the first chamber.

Their chamber requires the player to climb across a set of monkey bars, which requires 15 Agility. It is recommended to bring food and an emergency teleport, as failing the monkey bars will damage the player. The chamber in which they are located, stretches from level 7 to level 10 Wilderness.

Be careful of player killers who disguise themselves in full bronze armour to take on the appearance of Earth warriors. Navigate to your Settings and set your click options to avoid attacking players. If you attack them, you will become skulled because you are in the Wilderness, and can risk losing all of your items if you are not careful. This can easily be avoided, as the bronze armour worn by players is much darker than an earth warrior's skin, and the feather on the helmet is purple.

A very small minority of non-disguised player killers would occasionally come here. When killing Earth Warriors keep a close eye and have a plan of escape (e.g. Stay by the monkey bars to escape quickly when they spawn). Keep in mind that teleports still work here, and do not bring anything you can't afford to lose.

It is recommended to use crush weapons or magic as these are their weaknesses. 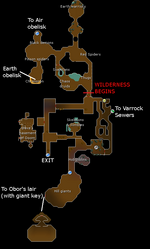 Earth warriors can be found in the northern-most section of the Edgeville Dungeon. 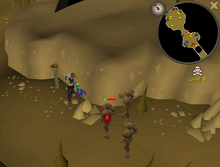 A safespot using a rock.

The average Earth warrior kill is worth 650.23.

There is a 18/128 chance of rolling the uncommon seed drop table.