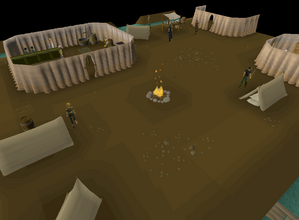 The Warrens is a sewer located beneath Port Piscarilius, accessed by climbing down the manhole located in the centre of the port. It is visited during The Queen of Thieves quest.

The Warrens is home to pirates, thieves, and homeless men and women. The Saviours of Kourend gang, led by the Queen of Thieves, makes their headquarters here, which is guarded by Devan Rutter.

The manhole can be quickly accessed with the The fisher's flute teleport of Kharedst's memoirs.

Aside from the tents found throughout the Warrens, there is a pub, which contains a cooking range and a water source. In addition, the Saviours of Kourend's headquarters contains an anvil.

There is also a poll booth, and two shops: Warrens Fish Monger and Warrens General Store.