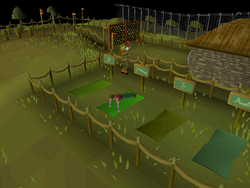 A player participating in the Drill Demon random event.

Drill Demon is a random event. During this event, the player is teleported to a training area and ordered by the drill demon to do some physical training (Push ups, Sit ups, jog in place or Star jumps). The signs in front of each training mat indicate what they are used for. Note that the signs are randomly rearranged after each player action performed on a mat.

The event can be left before completion by talking with the Drill Demon, this however grants no rewards. The outfit can be stored in the fancy dress box of a player-owned house costume room. 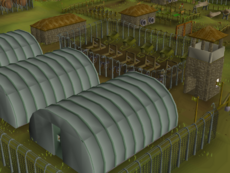 Three barracks, alongside an enclosure with cannons, catapults and carts just north-west of where players participate in the random event. 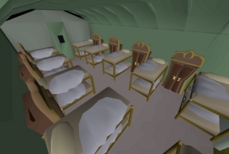 The interior of the barracks, furnished with bunk beds and wardrobes.
Retrieved from ‘https://oldschool.runescape.wiki/w/Drill_Demon?oldid=14294256’
Category: