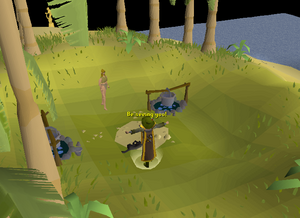 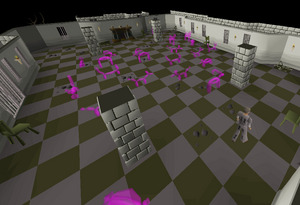 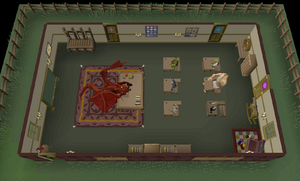 ScapeRune is an area consisting of an island and prison, either of which players may be taken to by the "Evil Bob" random event. It is also the location of Mr. Mordaut's classroom.

The player is accosted by Evil Bob, the evil twin of Bob the Jagex cat. With a "meow" from Evil Bob and an "No... what? Noooooooo!" from the player, you will arrive at Evil Bob's island. If you shout "Aaarrrrgh!" instead, you arrive in the prison. When you return, a message appears in the chatbox that says "Welcome back to Old School Runescape."

Alternatively, the Dunce will appear and inform the player that Mr. Mordaut wants them to come to school for a test and will teleport the player to the classroom if they agree.

After declaring you to be his slave, Bob will demand fish. Talk to his other slaves to be shown a video clip zooming to the required fishing area. There is one at each compass point, marked by different statues.

A small fishing net may be collected from the beach between the fishing areas, but it will not be kept on leaving the island. Catch a "fishlike thing" and use the uncooking pot to make it raw. Talk to Bob, and he will eat it if it was caught from the correct area.

If the fish was caught from an incorrect area, Bob will eat it, and then say it is disgusting. Each time you feed Bob an incorrect fish, it will take one more fish to get him to fall asleep, and you must keep going to the slave and catching fish to uncook and feed to Bob. For example, if you feed Bob one incorrect fish, it will take 2 correct fish to get him to fall asleep. Making 2 mistakes will require 3 fish to lull him to sleep, and so on.

When the fish has been eaten, Bob falls asleep and the player may escape through the portal, receiving some Fishing experience, or in some cases, Magic experience depending on the action being performed.

On reaching the portal, the player is now reminded to collect any dropped items before leaving.

When you leave, you make a raspberry emote at the sleeping Evil Bob shouting, "Be seeing you!", and then teleport back to where you were before the event.

Originally, on getting to the island, the player was only able to speak cat and required an "Amulet of Humanspeak" from a chest in order to talk to the slaves. While this was an example of Jagex humour based on the Amulet of Catspeak, it wasn't obvious to players who knew nothing about cats. Now, if you ask Evil Bob how he can talk to you, he'll tell you that he's wearing an Amulet of Humanspeak, quite contrary to what it was like then, where you had to get it. This also adds in another piece of Jagex humour on the Amulet of Catspeak in RuneScape. In ScapeRune, Evil Bob is wearing an amulet to talk to humans, attempting to teach the human slaves catspeak, while in RuneScape, humans use the Amulet of Catspeak to talk to cats.

Originally, four fish were required to leave, later two, now only one.

Evil Bob can also teleport players to a prison, where they must speak to Prison Pete in order to discover how to escape. To escape, you must pull a lever, which will tell you which type of balloon animal to pop in order to find a key. The animals are randomly selected and the same one can be picked twice.

Every balloon animal contains a prison key, but you must pop the right one in order to open the first barrier. After getting three correct keys, you are free to escape with Prison Pete, and you will be returned to where you were, gaining a small prize.

The varying characteristics between each balloon animal can be easily distinguished from their horns, body width, and tail length.

The "return key" option, the default action for the key, walks directly toward Prison Pete, with no attempt to navigate around obstructions.

It should be noted that the prison bears a striking resemblance to the party hall in Falador, perhaps implying that every location in RuneScape also exists in ScapeRune.

Upon arriving in the classroom, Mr. Mordaut will inform the player that they have been slacking in their studies and makes the player take a test to prove their knowledge.

Upon completing the event, Mr. Mordaut will award the player with a book of knowledge that the player can use to gain exp in a chosen skill.