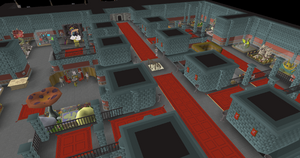 The Old School Museum is a museum located beneath the Falador Party Room, accessible by climbing down the staircases.

Here, a player can travel through the history of Old School RuneScape, with each gallery containing displays of past updates, with the examine text of each display stating their date of release.