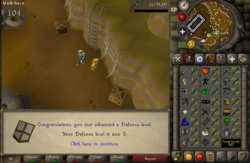 A player receiving a fake level up message for Defence outside of combat.

2017's April Fools was a minor event that involved fake messages in the chatbox.

Players who were completing Treasure Trails would occasionally receive a message stating that they have found the helm of raedwald, a long sought-after helmet for the Crack the Clue! event. Instead, a halloween mask would appear on the ground, with the chatbox stating "jk :P"[sic].

In addition, players with level 1 in Defence would randomly receive a fake message stating that they have levelled up their Defence level to 2, regardless of what they were doing.