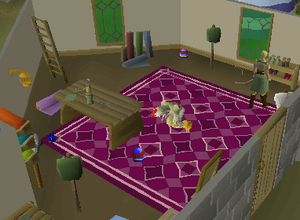 An attempt to pick up an Easter egg.

The 2013 April Fools event was a minor event beginning on 1 April 2013. Jagex announced that to celebrate Easter, they would be adding rares back into the game by dropping party hats and easter eggs in various locations.[1]

However, it was realized that the party hats and easter eggs were simply frauds; they appeared to move and even hover above the ground when players neared them. Some players cornered the eggs and hats and the player made an animation to pick it up, but nothing appeared in the inventory. Telegrabbing the hats and eggs made items like cabbages and skirts appear in the player's inventory.