Party Pete's Birthday Bash was the fourth annual birthday event held in Old School RuneScape, celebrating the release of the game on the 22nd of February 2013. The event was located in Falador and centred around Party Pete preparing one of his signature celebrations. 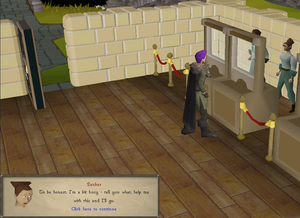 Inviting a banker to the celebrations.

Speak to Party Pete inside the Falador Party Room, and learn that he needs the player to invite some people to the party. He will give you an invitation list. Each NPC will need help with answering a question before they attend the party. 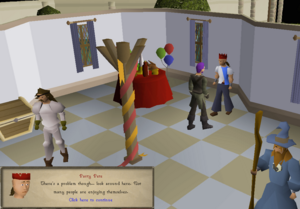 Party Pete expresses his discontent with the state of the celebrations.

Return to the Party Room, and discover several more people attending the party that you did not invite (Gnome child, Lutist, Tim, Crunchy, Gabe, Aggie, Evil Dave, Cow31337Killer, Squire, Kaylee, and Sergeant Damien). Speak to Party Pete, who will see that the partygoers are not enjoying themselves, and wants you to liven up the party.

For this part, players will need 200 coins and three beers. Two free beers can be obtained from Lucy or Megan upstairs.

Speak to Party Pete, then a cutscene will ensue, where a mugger intrudes the party, planning to kill everyone. Party Pete then challenges him to a dance off. Because of the official mugger code, he cannot refuse it.

After the cutscene, speak to Party Pete once more to receive a 4th birthday hat and birthday balloons. If players did not obtain the birthday event items from previous years (a war ship, cow outfit, and gnome child hat), they will receive it along with this year's rewards.

In addition, the player will unlock the smooth dance and crazy dance emote.