From Old School RuneScape Wiki
Jump to navigation Jump to search
The RuneScape Wiki also has an article on: rsw:Tzrek-jad
TzRek-JadJalRek-Jad? (edit) 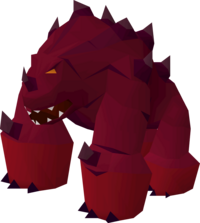 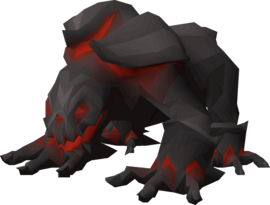 The TzRek-Jad (translated as Baby Fire Elemental) is a pet that can be obtained via defeating TzTok-Jad in the TzHaar Fight Cave. Players are twice as likely at receiving the pet upon defeating TzTok-Jad if they are assigned to defeat it on a slayer task. In addition, players may exchange their fire capes by speaking to TzHaar-Mej-Jal for a 1/200 chance of obtaining TzRek-Jad. Providing a player defeats TzTok-Jad while on a slayer task for a 1/100 chance of the pet, and hands in their cape, the overall chance of receiving the pet from either the boss or the cape is approximately 1/67.