From Old School RuneScape Wiki
Jump to navigation Jump to search
This article is about pet dropped by Scorpia. For the monster found in Scorpia's cave, see Scorpia's offspring (monster). 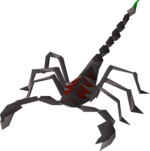 Scorpia's offspring is a pet dropped by Scorpia. It is similar in appearance to the offspring encountered during the fight with Scorpia, but is slightly larger and has a unique colour scheme.