The Quidamortem Cave is a small cave found underneath a crevice on the western side of Mount Quidamortem. The cave is visited during Tale of the Righteous.

The cave contains a temple, which was constructed sometime during the reign of King Shayzien VII in the 37th decade (1,040 years ago). Within the temple, an unstable altar can be found giving off a similar power to the Dark Altar, and is able to amplify the true Dark Altar's powers, allowing it to reach areas it previously could not. Gnosi speculates that the altar found in the cave allowed Xeric to maintain his immortality.

Here, the natives species of lizards in the Kebos Lowlands were experimented on, creating creatures such as the Corrupt Lizardman. King Shayzien VII noted in a journal he wrote during this time mentioning compatible creatures in Quidamortem for mass production, suggesting he was creating the lizardmen as an army for Kourend. 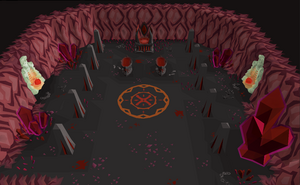