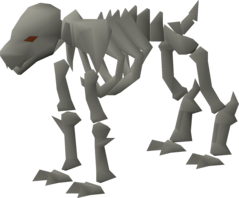 The Skeleton Hellhound is a monster summoned by Vanstrom Klause during the In Search of the Myreque quest to kill the remaining Myreque members. In order for the quest to be completed, the Skeletal Hellhound must be defeated, which should not be a problem for a moderately levelled player, as it is fairly weak. Crumble Undead does not work against this monster, and the salve amulet seems to have no effect.

It can be fought in the Nightmare Zone after the quest is completed.