Firemaking is a skill commonly trained first by ironmen, almost entirely through Wintertodt. Due to the benefit of having a low Hitpoints level when subduing Wintertodt, it is common first objective to level Woodcutting and Firemaking to 50 before any other skills.

Most of the logs obtained through Woodcutting or otherwise are commonly used in birdhouse trapping, leaving few logs for Firemaking training, making Wintertodt even more ideal.

To start off, go to the top of the Lumbridge Castle, light the logs that spawn there, hop Worlds and repeat until level 15. The goal is to be able to cut and burn oak logs, which requires

Cut oak logs and light them as obtained until level 35 Woodcutting. Oak trees are common place throughout Gielinor, and the logs will be burned, so proximity to a bank is not necessary.

To be able to cut Teak trees, players will need

35 Woodcutting. Since Firemaking gives more experience per log, it's recommended to continue with oak logs to around level 39 Firemaking, at which point Woodcutting should be 35.

Teak trees can be cut at 35 Woodcutting, requiring 35 Firemaking, south-west of Castle Wars, until level 50 Firemaking. There is only a single tree, and the spot can sometimes be crowded, so some World hopping might be necessary. There are also three Teak tree spawns on the north side of the Isle of Souls. 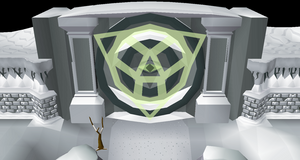 The Doors of Dinh, the entrance to Wintertodt's prison.
Main article: Wintertodt

Subduing Wintertodt becomes the best option from level 50 onwards, as it offers coins, various logs, gems, ores, herbs, seeds, and raw fish (among other things). It doesn't require any supplies other than some food.

Doing Wintertodt at a low level is strongly recommended, as players are able to heal effectively with low-tier food and the rewards benefit much more at lower levels. It is advised to train Firemaking at Wintertodt until level 60 Woodcutting (achieved at around level 88–90 Firemaking) for access to the Woodcutting Guild, where the player can buy axes up to rune. The fastest way to gain Firemaking experience from Wintertodt is to be on an official World (307, 309, 311, 389), which have fast games that usually last around 4 minutes.

Players will use most of the logs they get on Fletching and birdhouse runs, so there aren’t many options for Firemaking training outside of Wintertodt.

50 Firemaking is the only requirement to enter Wintertodt's prison, players will need a decent axe and warm clothes to effectively subdue him. It's strongly recommended to gain a few levels in

Construction to maximise experience as well.

The speed of chopping bruma roots effectively caps out with a steel axe, so bringing steel or higher is highly recommended. Steel axes can be purchased from Bob's Brilliant Axes. in Lumbridge for

200, pickpocketed from H.A.M. Members with

15 Thieving, or crafted with

3,250, which can be prohibitively expensive early on.

Should one be unable to make games necklaces and is forced to leave the area or dies frequently, it is recommended to gain access to the Arceuus Home Teleport (requires 60% Arceuus favour) or unlock the fisher's flute teleport on the Kharedst's memoirs (requires completion of The Queen of Thieves) to return there faster.

Fletching the bruma roots into kindling is only recommended when the player would not meet the 500-point mark for the extra experience gained at the end of the round. Otherwise, bruma roots should not be fletched into kindlings, as this significantly hampers experience rates and the few extra points is not worth the experience loss.

It doesn't matter too much when you open your Wintertodt crates. Early game the gp, logs for birdhouses, and magic logs for Desert Treasure are useful. If you can benefit from those, or any of the other drops, you should be opening them. If you have 0 use for any of the drops you can hold them until you do.

High-level players will get better rewards with higher stats, but the rewards do not benefit as much and the players will also take more damage. However, when wearing the Hitpoints cape along with a regen bracelet and using an ornate rejuvenation pool to restore stats, players will need very little (if any) food for doing Wintertodt.

45 , among many other medium-level skill requirements.

Challenging Wintertodt alone will yield less Firemaking experience per hour, but much more

Construction experience and rewards per hour. It's possible to gain the maximum number of points, 13,500, in around 50 minutes, which will reward a supply crate containing 28 loot rolls.

Burning magic or redwood logs from woodcutting or monster drops is also an option, if the player does not have any other use for them. However they will most likely be needed for doing bird house runs.