Thieving level up - normal
The music that plays when levelling up.

Thieving level up - with unlocks
The music that plays when levelling up and unlocking new content.

A player pickpocketing a cornered guard.

Opening coin pouches (and some other actions) can be done while stunned, however eating while stunned will extend the timer before you can pickpocket again. Instead, if timed quickly and correctly, food can be consumed between pickpocket attempts without requiring the usual 2-ticks. 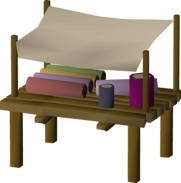 After successfully stealing from a stall, their respective owners will refuse to interact the player until 10 minutes have passed since the last theft from their stall. Time passed while logged out does not count toward removing this restriction. Curiously, this extends to any NPC that owns the same type of stall, not just the one you stole from.