Cooking is one of the fastest skills to train, even on an Ultimate Ironman. Dedicated training methods like the Hosidius Mess and making jugs of wine can give more than 200k experience per hour, and passive training in tandem with Fishing can give solid amounts of experience as well. The skill itself is not particularly useful, as cooking food is often less convenient than simply buying food from a shop, though at high levels it can be handy for cooking noted raw sharks from Fishing minnows.

While early Cooking training is not particularly slow, it can be sped up a bit by doing some early quests that reward Cooking experience.

At pretty much any level, one way to train Cooking is to pair it with Fishing training. At low levels, this just involves cooking any caught fish on a nearby fire. Many fishing spots have nearby trees that can be cut down and used to make fires, and the fly fishing spots near the Barbarian Village have a permanent fire very close by. At higher levels, noted raw sharks from minnow fishing can be un-noted and cooked on demand, making them useful for combat situations where food is useful. 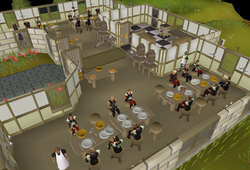 Starting as low as level 20 Cooking, training at the Hosidius Mess hall becomes a viable method, owing to its low preparation and inventory requirements. Unlike other methods of training Cooking, the Mess hall provides all the ingredients necessary to make food there at no cost, allowing for non-stop training with no time spent on collecting fish or other supplies. At level 20, it is only possible to make servery meat pies, with expected rates around 48k-55k experience per hour depending on burn rates. At level 25, servery stews become available, increasing potential rates to around 70k-80k experience per hour.

The most notable training method at the Hosidius Mess is cooking servery pineapple pizzas, which become available at level 65 Cooking. With good focus, this method can reach 200k+ experience per hour. This is one of the fastest available training methods for Ultimate Ironman players, and the lack of prep time or stringent inventory requirements makes it an excellent way to train. Servery pineapple pizzas stop burning at level 68 Cooking, so it may be advantageous to wait until that level before training with this method.

One possible training method is to use noted grapes gotten from Zulrah, Vorkath, or the Kalphite Queen to make jugs of wine. While not particularly faster in terms of experience rates when compared to training at the Hosidius Mess, the downtime associated with waiting for wine to ferment allows for training some other skills at the same time, which may be useful to some players. For example, while waiting for wine to ferment, it is possible to make about 100 broad arrows (10 sets of 10) before dropping the jugs of wine and making more. In this manner, it is possible to get up to 200k Cooking experience per hour while at the same time earning up to 300k Fletching experience per hour as well.

To train with this method, it requires noted grapes, noted empty jugs (easily gotten in bulk through empty jug packs), and runes to cast the spell Humidify (preferably stored in a rune pouch). The sample inventory also includes broad arrowheads and headless arrows to make broad arrows while waiting for the wine to ferment. The process is as follows:

Without Humidify, jugs of water can be filled manually at a water source, though this is significantly slower. Similarly, without noted grapes they can be bought from the Culinaromancer's Chest and used before switching worlds to one with a full stock. This requires coins to buy the grapes and is noticeably slower as well. Besides broad arrows, adding feathers to dart tips is another good way to train Fletching while waiting for the wines to ferment. More inventory slots can be dedicated to other supplies for Farming or bird house trapping supplies, though this would impact experience rates as well. 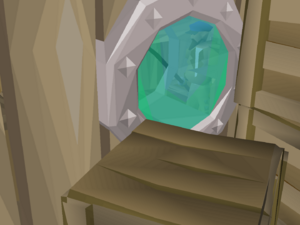 With 100% favour in Port Piscarilius, players have access to the full stock of Frankie's Fishing Emporium, with large variety of raw fish, and a short running distance to a range. While not the fastest method available, buying fish from Frankie's Fishing Emporium and cooking them can be a dramatically lower intensity method of training cooking for ultimate ironmen, whilst still providing decent experience rates and only costing a modest amount of gold. With reasonable attention paid and decent agility levels, players can expect to cook around 800-900 fish per hour.

As large amounts of running are involved, access to the full graceful set is strongly recommended; in addition to medium to high Agility levels. Level 10 Hunter is also suggested as obtaining 100% favour as quickly as possible requires digging for sandworms.

Most notable among the sold fish are raw cod and raw bass, which are sold at a far lower price per XP in comparison to other fish. Raw tuna also provides competitive experience rates with low costs. Players may wish to cook multiple types of fish before hopping worlds, further reducing the method's intensity. Below is a list of useful fish, assuming around 850 per hour are cooked:

Note: If below the level required to cease burning a fish, experience rates will be lower and net costs slightly increased, varying with cooking level.

After gaining access to the Culinaromancer's Chest, players may purchase Grapes and Empty jug packs in order to create Jugs of wine. This strategy involves filling your inventory halfway with empty jugs at the bank chest, and then hopping worlds until the rest of the inventory is filled with grapes, then filling the jugs of water and finally using the grapes on the jugs of wine to create Unfermented wine, which turns into Jugs of Wine after 12 seconds.

This strategy is particularly useful if you have at least 5 Recipe for Disaster subquests completed, giving you access to a stock of 6 grapes, but not full access. This is because the chest's stock is shared with people that have the same level of access and is more frequently out of stock at higher levels of access.

This training method can net 100k+ experience per hour with good attention and world hopping. Some players prefer this method to Hosidius Mess due to the lower level of complexity and comparable experience rates before Servery pineapple pizzas at 65 Cooking.