Firemaking is a fairly straightforward skill to train, with most of the training recommended to be at the Wintertodt. Besides quest and Achievement Diary requirements, the skill does not provide much direct benefit to the player. The rewards from the Wintertodt can be a nice incentive to train the skill, however.

To start off, go to the top of the Lumbridge Castle, light the logs that spawn there, hop worlds and repeat until level 15. Complete Monk's Friend (and cut and light some regular logs) to get level 15 Woodcutting if needed, cut oak logs and light them as obtained until level 35 Woodcutting. Continue by cutting and lighting teak logs south-west of Castle Wars or at the northernmost point of the Isle of Souls until level 50 Firemaking.

As Firemaking is typically trained at a low level, it is likely that players do not have anything better than a steel axe to cut the logs. Low-level players may wish not to do combat to get an axe upgrade from tree spirits or blue dragons, as players take more damage in Wintertodt at higher Hitpoints. However, getting level 50 Firemaking should go relatively quickly even when using the steel axe. 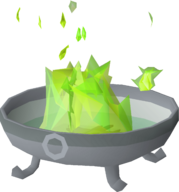 There are two main strategies for subduing Wintertodt: doing short rounds in a mass in one of the official Wintertodt Worlds, or doing long rounds solo. Mass rounds offer faster Firemaking experience rates, but solo rounds will offer much more Construction experience. As Construction is a much more difficult skill to train than Firemaking, many Ultimate Ironman players opt to subdue Wintertodt solo or in small groups.

Wintertodt supply crates give a variety of rewards, with their quality scaling off of the player's levels in various skills. For example, a player with a high Fishing level will be rewarded with higher quality fish, such as raw swordfish and raw shark. Because of the limited inventory space available to Ultimate Ironman players, it is not generally possible to keep all the rewards from fighting the Wintertodt, and some of the less useful items should be dropped if not being used sooner than later.

It is strongly recommended to have as few items as possible when subduing Wintertodt. This allows players to store more loot obtained from the supply crates into the looting bag. Storing items at an Item Retrieval Service is not recommended, as Wintertodt is a dangerous activity and it is very possible to die to a disconnection.

Low-level players are strongly advised to subdue Wintertodt solo instead of doing it in one the official worlds. This allows the player to stay in the camp for hours before the player has to store the loot into the looting bag. Players are also able to keep most of the loot without spending too much time bagging the items, which is particularly useful since the rewards benefit much more at lower levels than higher. Solo rounds also give much more Construction experience compared to mass rounds, which is much harder to gain than Firemaking experience at lower levels.

Players with very low Hitpoints can use pineapple rings for food. Pineapples can be bought from a Trader Crewmember in Brimhaven and then noted at the nearby Tool Leprechaun at the fruit tree patch. Alternatively, players can use the fish from the supply crates, which is sufficient even at slightly higher Hitpoints levels.

High-level players are advised to have the basic jewellery box (or higher) in their player-owned house. It provides a fast teleport back to the Wintertodt Camp, and also to Clan Wars for restoring stats, and Burthorpe for access to the Warriors' Guild food shop. This allows players to easily do rounds in one of the official worlds, however players can still do solo rounds for the extra Construction experience. Should players not have the required Construction level to make the jewellery box, doing mass rounds is not recommended as players would have to spend time making jewellery, and more charges are used when doing fast Wintertodt rounds.

Players who have high Hitpoints will need good food to heal themselves. Food can be quickly unnoted at the bank chest in the Wintertodt Camp. When doing so, it is recommended to unequip worn equipment to fill the inventory so the player will only unnote whatever amount of food they need.

Fletching bruma roots into bruma kindling is worthwhile when running to the brazier and while lighting it, or when the player would not otherwise meet the 500-point mark at the end of the round. Otherwise, players should not fletch the bruma roots as this lowers experience rates a lot, and Fletching can be trained through better methods.

The fastest way to gain Firemaking experience from Wintertodt is to be on an official World (307, 309, 311, 389), which have fast games that usually last around 4 minutes. The experience rates for mass rounds are shown in the table below. These rates do not take into account the time it takes to obtain food or store the loot into the looting bag, so the actual rates may be slightly lower.

The quality of the rewards scales depending on the player's stats. The most important stats are Farming and Herblore, as seeds and herbs are the most valuable rewards especially at lower levels. Level 99 Firemaking would give enough herbs and seeds for level 30 Herblore if the player started with level 3 Herblore.

Most seeds and herbs should be kept. At lower levels, players may want to drop the occasional high-level seed or herb if they can not be used soon afterwards. At higher Farming and Herblore levels, those high-level rewards should be kept for later use, and low quality rewards like grimy marrentills and acorns can be freely dropped. The seed box is very useful for storing more seeds in the limited available inventory space.

Logs can be kept for doing bird house runs. They can also be used for Construction and Fletching training. Low-level players are advised to keep magic logs for Desert Treasure and Mourning's End Part I, as the logs can be difficult to obtain without level 75 Woodcutting.

Ores and gems are obtained in relatively low quantities, so they are not as important to keep as herbs, seeds, or logs. Early on, players should keep uncut rubies as 250 rubies are required to get the curator's medallion for the mounted digsite pendant. Other gems can be cut for some Crafting experience and dropped, or kept to make useful jewellery such as rings of recoil to charge a ring of suffering. Gold ore can be kept for getting fast Smithing experience later, and players with high Smithing levels can keep runite ore for its high value. Other ores are generally not worth keeping.

The fish rewards are not generally worth keeping, as there are plenty of more convenient food sources available than having to juggle raw fish. Low-level players may want to keep 1 stack of raw fish for healing.

The pyromancer outfit is useful for the minigame itself, as it grants bonus Firemaking experience when worn and counts as warm clothing. The outfit can be stored in a magic wardrobe at level 42 Construction.