Queen Ellamaria Remanis is the Queen of Misthalin, ruling alongside her husband, King Roald Remanis III in the capital city of Varrock. Players may start the Garden of Tranquillity quest by speaking with her, in which players must find rare seeds, plants, and other decorative items for her garden. It is revealed during the quest from the Wise Old Man in Draynor Village that, before becoming a queen, Ellamaria was once a peasant, working as a barmaid in the Blue Moon Inn in southern Varrock, and not related to any royalty what-so-ever. Despite her humble beginnings, Ellamaria now looks down on all commoners and adventurers, acting very haughty. King Roald seems to be extremely afraid of her because of her short temper. 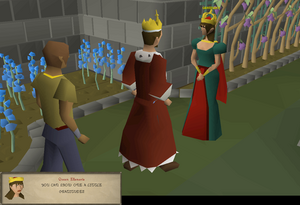 Ellamaria scolding her husband, the king, after showing disinterest in her garden.