Player Killing (commonly known as PKing, player vs. player, or PvP), is the act of two or more players engaging in combat against each other. Player killing differs from other forms of combat in that players do not fight against monsters whose actions are defined by RuneScape's game engine. There are various places throughout Old School RuneScape that players can participate in PvP activities such as:

Currently, players can also participate in player killing in dedicated "PvP worlds," where players can attack other players in most places around Gielinor, with the exception of designated safe areas and banks. There is only one dedicated PvP world that does not change with the PvP world rota, this is World 392. Other worlds can be found on the server list.

PvP is a popular activity throughout Old School RuneScape. Some accounts are even designed solely for PvP, which are colloquially referred to "pures", who limit or entirely avoid training one or more combat skills, especially Defence, so their offensive stats will be a lot higher than their combat level suggests. Because of their history of success in the Wilderness, and the overall greater amount of experience pures must gain in their individual skills of choice, pures are regarded as more effective at player killing than regularly trained accounts of the same level.

As of 30 October 2015, a new PvP game mode has been released. In this game mode, one can be attacked by players of any level, almost everywhere in the world, with exception of certain safe areas. Upon death they lose half of their total XP and the 10 most valuable stacks of items from their bank.

The Wilderness is a large area of land in which any player who enters it is able to attack other players. It is a dangerous place as players can die and lose their stuff except for three items or four if the player had Protect Item on before dying. If the player happened to be skulled from attacking another player and said player dies, they will lose all of their items, and only one item is kept upon death if Protect Item was activated.

The following locations are hotspots for player killers. Warning: Approach these areas with extreme caution, especially on PvP servers! 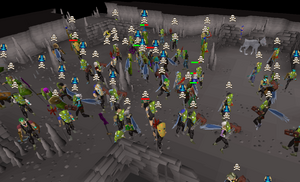 Players are slaughtered by a large clan of player killers in the Revenant Caves.

Below are some common gear and inventory setups player killers use with a decent budget for risk. Tier 40 or best-in-slot gear are recommended.

PvP combat could take place at most locations in the RuneScape world. The rules of combat were the same as in modern RuneScape Classic Wilderness. Lumbridge was designated as a neutral area in which players could not attack each other; this was done to prevent a practice called "spawn camping", in which recently killed players were immediately killed again as soon as they respawned. However, it was possible for a character to be attacked in the upper levels of Lumbridge Castle. In addition to this restriction, NPC Guards and White Knights patrolled the cities of Varrock and Falador, breaking up PvP battles by attacking the aggressor. These guard units were limited in number, however, and if all the units in a city were already in combat, PvP combat could go on freely.

At this time, the Bank of Runescape was limited to Varrock and Falador and could only store coins. As a result, players would have to carry their valuables with them, making PvP combat much riskier.

The player-killer/non-player-killer modes were, however, removed from the game on 13 August 2001 when the Wilderness was added. Later, additional areas where PvP combat was allowed were added.