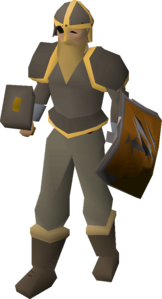 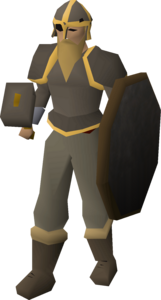 Brunt is the current chieftain of Rellekka, and maintains the Fremennik lifestyle of his people. Not much is known about his family other than he has a son, Armod Brundtson, and an unnamed wife. Brunt had sent Armod into exile because he could not complete his trials, which caused his son to greatly resent him.

In Mountain Daughter, the mountain people, led by Hamal, had sent a representative, Svidi to Rellaka. However, he did not return after several days, prompting Hamal to believe that Brundt's people had captured him and asked a passing adventurer to save him. The adventurer soon learned that Svidi did not enter Rellaka for fear of being attacked and demanded a guarantee of safety before he would enter. Brundt told them that they would need to bring back their runestone rock, which the adventurer did, if only a part of it. Brundt then handed them a guarantee of safety to give to Svidi.

The same human adventurer later asked if they could join his tribe, though Brundt was initially hesitant because he believed they were looking for a quest. Since the adventurer was not born into the clan, Brundt suggested they obtain a majority of the ruling council's vote so they could become a member of the clan. The adventurer managed to obtain the votes of seven of the twelve members, and Brundt formally accepted them into the clan.

Brundt also plays a role in Lunar Diplomacy, where he explains the history between his people and the Moon Clan of Lunar Isle, and handed them a seal of passage to allow them to safely talk with the inhabitants of the isle. Brundt will replace the seal of passage if the player loses it.

In Dragon Slayer II, the adventurer returns to search for a frozen fortress in the north. Brundt warns them of a dragon there that has slain many of his finest warriors, but allows them to go there and battle the beast. He later works with the other human kingdoms and territories in repelling the Dragonkin assault by Zorgoth, and congratulates them after they slay Galvek.

During The Fremennik Exiles, Brundt is forced to exile the adventurer following them killing a young basilisk in the sand pit due to the End of All Things. However, he tells the them to meet him south-east of town, where apologizes for the council's irrational decision and advises they create V's shield to regain the trust of the council, and he would end their exile in response. He accompanies the adventurer to the Island of Stone, where they defeat the Jormungand. Brundt formally reinvites them into the clan and they have a feast to celebrate their victory.

Brundt the Chieftain is the solution to the medium anagram clue: Dt Run B. The answer to his challenge scroll is 4.