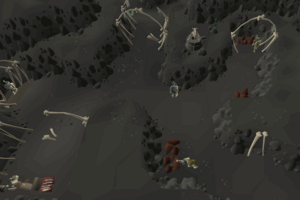 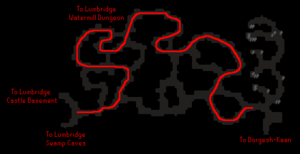 The Dorgesh-Kaan Mine (also known as Dorgeshuun Mines or Cave Goblin Mines), is used by the Dorgeshuun tribe of Cave goblins. The mine contains 9 iron ore rocks and 12 silver ore rocks, and it requires The Lost Tribe quest to be started to use. It can be accessed via the tunnels from the Lumbridge Castle cellar by going through the tunnel entrance and talking to or following Kazgar in the tunnel. (A player could retrace the route followed during The Lost Tribe, but this is unnecessary and dangerous.) The mine has the entrance to Dorgesh-Kaan, the Dorgeshuun underground city.

Although the mine requires a light source, it is possible to enter the mine from Dorgesh-Kaan without one. It is even possible to navigate in the mine after doing this by using the darkened image provided. However, players attempting to do this will find themselves swarmed by cave insects that will damage them slowly but regularly (constant 1s, and these hits cannot be blocked by any form of Defence, including Prayer) until they either light up a light source, leave the mine, or die.

Mining in the mines[edit | edit source]

Mining in the Dorgeshuun mine is not recommended for most purposes, as better mining locations for speed or ore-gathering efficiency exist. While present in the mines, iron or silver ore can be mined and sold to Mistag for a small amount of coins. However, it is more profitable to mine the ore, talk to Mistag, be taken to the entrance of the mine, bank the ore (preferably in the Culinaromancer's Chest if Recipe for Disaster is partially completed, or at the Lumbridge bank on the third floor of the castle), and then sell the ore over the Grand Exchange. Simply selling the ore to Mistag is recommended for those who care more about the experience rather than the profit, as it is considerably faster, and the mine is a useful place for power levelling.