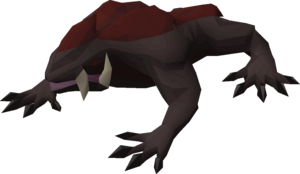 The Monstrous basilisk is a superior variant of the Basilisk. It has a chance of spawning once after purchasing the unlock Bigger and Badder for 150 Slayer reward points from any Slayer master.

Similar to their lower-level counterparts, a mirror shield or V's shield is required to safely engage them, as otherwise the player will take rapid damage and have their stats drained.

Drop rates estimated based on 48,470 kills from the Drop Rate Project, unless otherwise cited.

The average Monstrous basilisk kill while on a Konar task is worth 41,039.61.