From Old School RuneScape Wiki
(Redirected from Random Event)
Jump to: navigation, search
The RuneScape Wiki also has an article on: rsw:Random events

Random events, anti-macro events, or simply randoms refers to a variety of NPCs and their associated areas that appear throughout RuneScape to interact with players. They will appear either to provide an item to a player or to ask the player to play a short minigame to earn a prize. When random events appear, they specify one player with whom they will interact, and only that player will be able to interact with them. If the player does not wish to interact with the random event, they can right-click and dismiss the event, or just ignore the event which disappears after a minute.

Random events can be limited or otherwise removed if the player enters specific areas. For example, any random event that takes players into an instance will never appear in the Wilderness (as it could allow a fleeing player to escape and remain there until it was safe). Random events will also not appear in banks and the Abyssal Sire's chambers; if one is following the player in the latter, then it automatically despawns as soon as they are inside.

These events were eventually phased out in RuneScape 3 as better anti-macro software was developed. After the release of Old School RuneScape, players and developers realized that modern macro clients were able to solve random events relatively easily and that a more comprehensive anti-macro solution needed to be implemented in the rebooted game. Many players complained that random events were harming gameplay; for example, players fighting aggressive monsters in the Abyss or Ape Atoll Dungeon would likely be confronted by a random event such the Sandwich lady, who would teleport players away if they could not solve her puzzle. Players would be unable to solve the puzzle interface because they were surrounded by aggressive monsters and would end up being teleported away, even though they were playing entirely within the rules.

As part of the Portal Nexus update, random events received another series of updates. According to Jagex, they believed many random events had outlived their practical use and were looking for a way to leave the nostalgia intact without disrupting the gameplay of both new players and those uninterested in the events. As such, certain events can now be left before completion. Leaving an event early however will not reward the player. 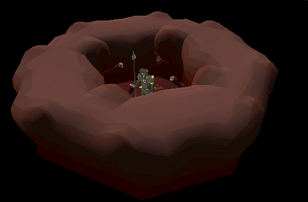 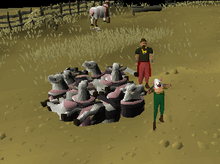 The Duke of Bridgelum standing next to a pile of dismembered cows.

The reward would have been pieces of the cow outfit, which are now given to players as a reward from birthday events.

The area in which the random event takes place.

The Speedy Gnome, Sebastian Gno, was mentioned in a Behind the Scenes article as being the "fastest gnome in the world", and was to be released alongside several other random events such as the Sandwich lady. Judging by the statement in the article ("Don't ignore them!"), Sebastian Gno would have been one of those random events where an NPC appeared and tried to get the player's attention, like the Drunken Dwarf.

However, Sebastian Gno was not added to RuneScape along with the rest of the random events named, due to the race track in the random event being static and thus not an effective anti-bot feature at the time.

Certain zones throughout Gielinor are designed so that players do not receive random events while in them. Traditionally, these zones were popular with players who wanted to train skills uninterrupted, such as players training Magic with High Level Alchemy. However, this also made these areas susceptible to bots. These zones lost some of their advantage with the 2014 update that made random events optional.